Disclaimer: this article does NOT cover variables used in SQL editor.

A variable is a special template which is replaced with an associated value. Variables help keep your configuration clean and tidy by avoiding unnecessary repetitions: instead of manually replacing each occurrence of some value, you can replace the value of a variable just once and its occurrences will be kept intact.

Variables are available in a lot of places. You might find them in:

Wherever you find variables available in the user interface, a hint will usually be present:

By clicking on it, a separate window will open showing all the available variables with their descriptions and values: 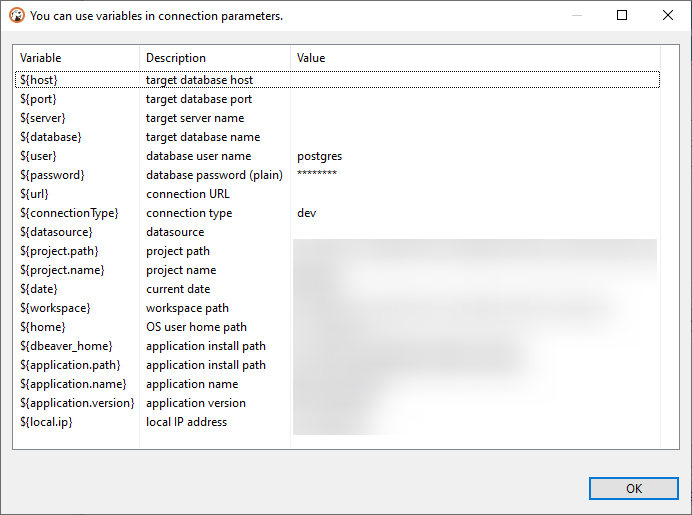 To use the variables you need to utilize a special syntax:

Where variable_name is a variable name which you want to use. The window shown above already contains ${ и } anchors so you do not need to specify them multiple times.

Variables may be a part of something bigger: e.g., a part of a path. For example, if some file lies under the user's root folder, you may want to use variable home: ${home}: ${home}/path/to/file.txt.

A value of a particular variable may be resolved from different places depending on its origin.

The resolution is performed in the following order (from the highest to the lowest priority):

If you have an environment variable called home, it will be resolved in the application-specific variable because it has higher priority.

Declare external variables in a file

You can create a file and fill it with pairs of named values and pass it to DBeaver using the -vars command-line argument.

Variables from this file can be accessed by other command-line arguments, in the data transfer wizard, and in other places that support variable resolutions.

For example, you may want to put your credentials in that file to avoid showing them to everyone else:

You can use them as such:

Here, the -con argument has the ${password} variable that will be replaced with P4$$w0r3 defined in the example file from above.

Did we resolve your issue?

Yes No, get help